Three recipients to be awarded the Medal of Merit 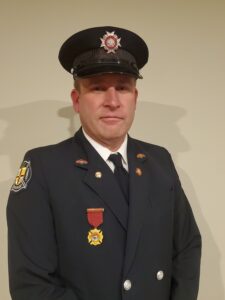 17 at intersection of Forks Road & Highway #3 Wainfleet (Chambers Corner), Wainfleet off-duty firefighter Matthew DeVries came upon the accident that had just occurred. A 60 year-old male driver had struck a pickup truck that had turned into his path causing him to be thrown from the motorcycle. The driver had sustained serious life-threatening injuries, including having his leg severed below the knee.

With no medical or personal protective equipment, off-duty firefighter DeVries immediately tended to the injured motorcycle driver by fashioning a tourniquet from his own belt to slow the loss of blood.

Within seconds of DeVries’s arrival, he had secured the scene, rendered life-saving first aid, updated 911 operators and dispatched air ambulance. “If not for Matt’s quick thinking and training, I do believe the driver would have died at the scene,” said Lieutenant. Jay Mous of the Wainfleet Fire Department. The driver of the motorcycle was air lifted from the scene and survived the ordeal. 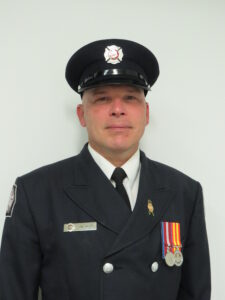 On January 19, 2019, off-duty firefighter Jamie Hiller, along with his daughter, were travelling north on Highway 6 in Fergus, when a vehicle pulled out in front of them without warning. Hiller took immediate action to avoid a collision with the vehicle. He quickly noticed that the driver was slumped against the driver’s side window as the vehicle continued to cross both lanes of traffic before crashing into a snowbank.

Hiller made several attempts to communicate with the driver who was unresponsive. He then stopped an oncoming snowplow, requesting the operator to call 911.

With disregard for his own personal safety and understanding the seriousness of the situation, Hiller smashed out the rear passenger window, allowing him to crawl inside the vehicle. Once inside, he was able to reach through the seats and put the vehicle in the park position, unlocking the driver’s side door. He then climbed back out of the vehicle through the window and did a quick assessment of the driver, who was without vital signs. Hiller pulled the driver away from the vehicle and proceeded to perform CPR.

The driver was taken to St. Mary’s Hospital Cardiac Unit in Kitchener. Doctor’s there informed the driver’s family that the only reason their father was still alive was thanks to the quick action by a local off-duty firefighter. 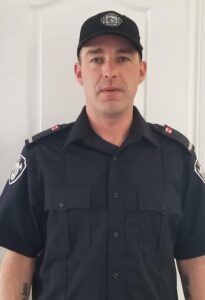 On Monday, January 6, 2020, off-duty Alnwick/Haldimand Township firefighter Matt Dickison and his wife were on their way home when they spotted a vehicle in the ditch north of Grafton on County Road 23 shortly before midnight.

Dickison got out to see if the driver needed assistance. When he approached the vehicle, he could hear the car engine revving, but found an unresponsive male in the driver’s seat. The vehicle doors were locked, but the window was open enough that there was enough room for Dickison to insert his arm in to unlock the door. Just as he got in, the car burst into flames.

He ran back to his car and told his wife to call 911. Dickison then ran back to the car, unbuckled the man from his seatbelt and pulled him from the vehicle. Dickison went back inside the burning car and rescued a small Husky dog from the backseat.

“I have no doubt if Matt, and his wife did not notice and stop for that car in the ditch the end results would have been much worse. In my opinion the driver and his dog would have perished in the burning car without Matt’s actions,”, said Fire Chief Mark Diminie of Alnwick/Haldimand Fire Rescue. Dickison had been an Alnwick/Haldimand Township firefighter for just over a year at the time of the incident.

A great way to support Firefighters.